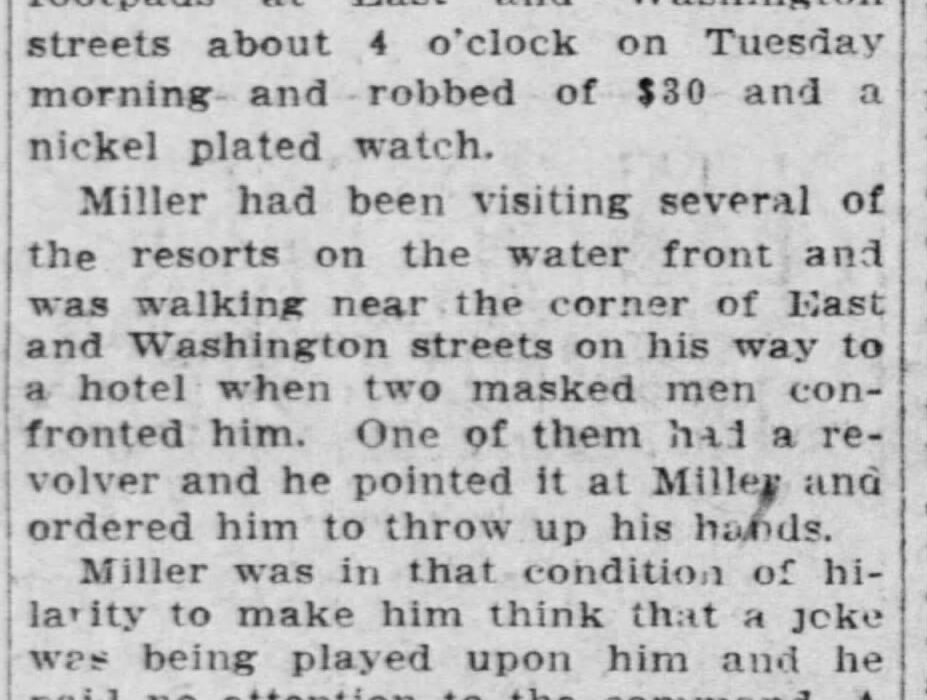 While writing these stories, I do a lot of research and reading.  One day while I was looking for information on Henry Miller, I came across the following article;

Henry Miller, a rancher near Napa Junction, was held up by two masked footpads at East and Washington streets about 4 o’clock on Tuesday morning and robbed of $30 and a nickel-plated watch.  Miller had been visiting several of the resorts on the water front and was walking near the corner of East and Washington streets on his way to a hotel when two masked men confronted him.  One of them had a revolver and he pointed it at Miller and ordered him to throw up his hands.

Miller was in that condition of hilarity to make him think that a joke was being played upon him and he paid no attention to the command.  A blow on the head laid the countryman prostrate on the sidewalk and knocked him senseless.  When he recovered, he found his pockets turned inside out, his money and watch gone.  He called for help and two policemen were soon upon the scene.  The rancher related his experience with the footpads and the officers made a thorough search of the neighborhood, but failed to find any trace of the robbers.  Miller was only able to give a vague description of them.  He called at police headquarters yesterday and said he was urgently needed at home, but if the men who robbed him were arrested, he would return and prosecute them.

Now, you might be very familiar with the language of 1904, San Francisco, but one of the words in the headline, caused me to stop and go whhhattt???  I had never heard of a FOOTPAD.  Except in referring to the sole of the foot or my dog’s sore footpad.  So, I really did not know what to do with the statement ‘RANCHER MEETS TWO FOOTPADS’.  I did not think that you could meet and greet a footpad, they just aren’t that kind of thing.

Well, in a move meant to clear up my confusion, I turned to my trusty Merriam-Webster’s Dictionary circa 2006 and found this;

Foot*pad \-pad\ n : a round somewhat flat foot on the leg of a spacecraft for distributing weight to minimize sinking into a surface.

As you can see, this did very little to asswage my confusion.  Next, I did what every modern person with a computer does…I “googled” it.  The Lexico Dictionary, powered by Oxford, came up with this;

A highwayman operating on foot rather than riding a horse.  ‘Discharged soldiers often took to brigandage: in 1718 one formed a company of footpads which raided the roads between Paris and Caen.’ ‘I was suddenly transported back to a Dickensian world of Fagin and footpads.’.

That first sentence cleared up the muddy water circling around the Footpads, YEAH!!!  Now what is a ‘brigandage’?…

This is not the only story that I have come across where Henry Miller was robbed, but is the one that I have had the most fun with.

I hope that you had fun reading this story.

Questions and comments are always welcome.  Or Subscribe to our newsletter

If you have not read all of the Under the eaves… stories, and would like to “catch up” they are posted on our website.

If you or your company shop amazon.com for supplies, gifts or special things, please register with smile.amazon and select The Miller Red Barn.  We will receive a percentage of each purchase you make, at no additional cost to you.