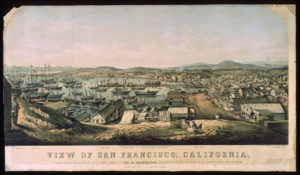 When we left Henry last…

he was lamenting that he had gotten the fever and missed all the money that he could have made in Panama City.

In August of 1850, ships began to arrive in Panama City. Henry, along with 1500 other passengers, boarded the steamer Republic. After 26 days, the Republic steamed into San Francisco Bay on September 24, 1850. Henry landed with his gold watch, clothes, a walking stick and $6 American dollars.

Tents covered San Francisco in 1850 when Henry landed. Fifteen years prior, there had not been a tent in sight. The three “roads” were more like rutted pathways. There was no government, no law and no order. The citizens consisted of gold miners, gamblers, harlots, politicians and other exploiters of humankind. In 1848, a census showed a population of 700. Whites numbered 350; Indians, Negroes or Sandwich Islanders made up 150, and the balance were Mexicans. The census also stated that there were 200 buildings (including tents, outhouses and sheds).

There is a famous quotation about San Francisco’s streets at that time: “This street is impassable, not even jackassable.” The streets had never been graded and were often seas of mud, one side being 10 to 15 feet higher than the other. In the winters of 1849 and 1850, many animals and people actual drowned in the mud.

There where no wooden boarding houses or hotels in San Francisco in the 1850’s. Wood was not nearby and tents were few for the influx of people. Many people lived under the open sky. If you were able to find a bunk or tent to sleep in, it could cost as high as $15 per night. Many were charged $8 per hour to sleep on a plank or table. The prices of goods and services kept even with sleeping accommodations: clothes washing was $20 per dozen pieces, apples went for $5 each and eggs went for up to $50 per dozen. Gold miners’ tools ran $15-$25 for a shovel, a gold pan ran $20, a pair of boots was no less than $40, and any kind of medicine was at the least $10 a dose while laudanum sold for $1 a drop.

On September 9, 1850, California was admitted to the Union. In October of 1850, a cholera epidemic broke out. Henry Miller had come to San Francisco in these were rough and ready times.
Henry’s story up to this point is not any different from any other immigrant that came to California’s golden shores. However, Miller was a young man who could and would take advantage of any opportunity that presented itself. What he made out of that opportunity is what made him one of the biggest cattle barons and landowners in America.